The Messiah’s House Is Empty

In the village of Kfar Chabad, just off the highway linking Tel Aviv and Jerusalem, stands a large brownstone house. I wrote about it in this space shortly after its cornerstone was laid in 1992. It was, in fact, designed to be a house fit for a king. Indeed, the purpose of the construction was to provide a dwelling for the rabbi that Habad-Lubavitcher (ultra-Orthodox) Jews had come to believe was the messiah of Israel. Their appointed “messiah” was a man who, according to his followers, had “the capacity to heal the world and unite Jew and Gentile.”

Today the house stands empty. The Lubavitchers’ “King Messiah” will not be coming. He died on June 12, 1994. In the wake of Rabbi Menachem Mendel Schneerson’s death, frantic followers searched for something on which to hang their hope. Some went so far as to predict a resurrection for their fallen leader. After months of awaiting the event, Rabbi Schneerson’s body is still entombed, and alternatives suggesting a re-embodiment or variant form of “return” are being put forth. One devoted follower said, “Every day I wake up and think: Maybe today the Rebbe will return.”

As one would expect, opponents within and without Judaism, who had ridiculed Habad’s claims that their messiah would soon grace the scene in Israel, were quick to point out the folly of such predictions after the rabbi’s death. They were right, of course, and while the faithful may doggedly trek along on pilgrimages to the Schneerson grave in the hope of finding an empty tomb, his physical remains still will be there.

Although this is true, let’s not join the chorus of detractors ridiculing those who fell prey to a misguided hope. The Lubavitchers’ faith may have been misplaced, but their desire was not. They correctly recognized that for all its bombast about peace and harmony, this world has no hope to offer. Unless God personally intervenes—and soon—we can anticipate where the course of human events will take us. All of the signs placed in Israel by the rabbi’s followers urging people to “Prepare for the Coming of the Messiah” and their bumper stickers declaring “We Need Messiah Now!” were, after all, proper expressions of where to look for the answer to mankind’s increasingly excruciating dilemma. No, the Lubavitchers’ desire for the Messiah was not the problem; their difficulty was their designee.

Two thousand years ago, in an era as pagan-plagued as our own, Jewish inquirers raised a question: “If thou be the Christ, tell us plainly” (Jn. 10:24). The person queried was Jesus of Nazareth, and His answer held no ambiguities. His response was a reminder of a previous statement. “Before Abraham was,” He told them, “I am” (Jn. 8:58). And with that statement He declared His Messiahship and deity. He too died, as He said He would. But after three days, as He promised, He left the tomb. For nearly two thousand years now, millions upon millions of Jews and Gentiles whose lives have been transformed by the power of His resurrection have testified to the identity of the true Messiah.

Former Jerusalem mayor Teddy Kolleck is credited with an intriguing statement. “I have,” he is reported to have said, “the hardest job in the world—to prepare Jerusalem for the Messiah. When he comes, I will respectfully ask him, ‘Sir, have you ever been to this place before?’” The mayor’s question is well taken and certainly one that all seekers of truth must at some point seriously ponder. We would disagree only with his timing. The time to ask ourselves that question is now. When He returns to His city, the query will already have been emphatically answered. 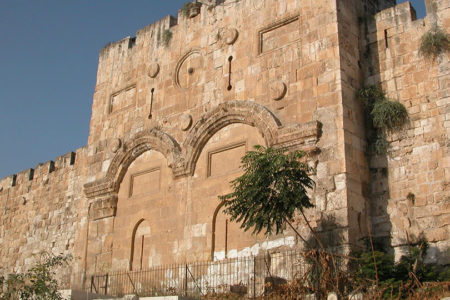