The Word of God is clear. A day is coming (we believe during the first half of the Tribulation period) when Russia is going to launch an attack into the Middle East to control the world oil supply. Her greatest fury will be reserved for the little nation of Israel, which has consistently humiliated the Soviet Union and sticks like a bone in her throat. The most recent setback for Russia was the result of Israel’s defeat of the PLO terrorists in Lebanon.

The Prophet Ezekiel foretells this coming invasion and identifies those nations which will be allied with Russia (Ezek. 38:1-6). Among these nations is listed Togarmah (38:6), which many Bible scholars believe includes modern day Syria. Syria remains an archenemy of the state of Israel. In light of this biblical truth, recent events in the Middle East cast an ominous shadow.

According to American and Israeli reports, the Soviet Union is now constructing two SA-5 surface-to-air missile complexes in Syria. The SA-5 is a long-range strategic air defense weapon never before deployed outside the Soviet Union.

According to press reports, the SA-5 complexes are located at Dumayr, an air base about 40 kilometers (25 miles) northeast of Damascus, and at Homs, a city near Lebanon’s northern border with Syria. SA-5 missiles fired from these complexes can reach all of Lebanon, northern and central Israel, and parts of Cyprus and Turkey.

The transfer of SA-5 anti-aircraft missiles to Syria has important diplomatic and strategic implications. It indicates a renewed and strengthened Soviet commitment to Syria. The willingness of the Soviets to transfer a weapon previously used only for air defense of their homeland against American strategic air attacks, and their evident decision to man the weapons using their own troops, indicates that the new Soviet leadership has decided not only to expand significantly its commitment to Syria’s war-making capability, but also signals its determination to maintain a position of influence in the Middle East heartland.

By supplying such a highly visible weapon, the Soviets also put the prestige of their own military on the line. It is highly possible, however, that the SA-5 complexes may represent just the first stages of a larger commitment. In order to protect the SA-5 complexes from possible Israeli air attacks, the Soviets may install other Soviet-operated air defense weapons as well, including other point defense anti-aircraft weapons (possibly including SA-8, SA-11 or SA-13 surface-to-air missile batteries) and interceptor aircraft.

The entry of Soviet combat troops into Syria has broader implications for the United States and even for NATO. Soviet SA-5 missiles in Syria inevitably affect the security of Turkey, since they pose a potential threat to NATO air bases in eastern Turkey. In addition, the specter of a potential superpower conflict in the region is presented by the Soviet decision to send their own troops to man the SA-5 complexes. Should the Soviets fire SA-5 missiles at Israeli aircraft, Israel would be compelled to attack the complexes. This could lead to an extremely serious situation, one that could lead to a superpower confrontation.

The military rationale for deploying SA-5 missiles in Syria is not yet clear. So far as can be determined at present the missiles present three challenges. First, the SA-5 could be used against high flying Israeli reconnaissance aircraft, which cannot be shot down by other Syrian air defense missiles. Second, the missiles could be used against Israel’s airbo early warning and electronic warfare aircraft (E-2C and modified Boeing 707). Such aircraft played a vital role in Israel’s successes against Syrian air defenses in Lebanon last summer. Third, SA-5 missiles fired from deep in Syria can attack aircraft in much of Israel’s air space. This would pose a serious threat to transport aircraft flying into and out of Israel, and represents a relatively cheap way for the Syrians to contest control of Israeli air space.

WHY ISRAEL REFUSES TO UNCONDITIONALLY WITHDRAW FROM LEBANON

A pressing problem in restoring the stability of Lebanon is creating a set of arrangements in the southern part of that country to prevent renewed terrorist activity after Israel withdraws. The anarchic conditions which existed in this region for 13 years prior to the Israeli action provided a breeding ground and zone of operation for PLO terrorist and artillery attacks against Israel. It was exactly to end this threat that Israel intervened militarily. Israel cannot now reasonably be expected to withdraw until an effective system of security arrangements is devised to prevent a regression to the previous situation. The problem is not remote: already some 3,000 PLO terrorists evicted from West Beirut to Syria in August have reentered Lebanon to resume armed activities and others are reported to be on their way back from Tunisia.

The challenge of security arrangements in the south is threefold: (1) preventing infiltration into southern Lebanon of arms and terrorist operatives bent on striking against Israel; (2) establishment of an internal security system within the villages and in the unpopulated areas of the south to prevent the formation of terrorist cells and impede the conduct of terrorist operations by any PLO forces remaining in the area; and (3) providing surveillance and early warning facilities to reduce the possibility of a Syrian attack.

The first function requires an agreement by the Lebanese Government to demark a special security area in the south to be kept free of terrorists. This security zone should be sufficiently wide to put Israeli targets out of range of any weapons available to the PLO, including long-range artillery and rockets. This will require the deployment of capable and committed forces which will perform their tasks diligently, not perfunctorily, to detect prohibited activity and to apprehend violators.

No perimeter guard can completely exclude the penetration of arms and terrorists into the region – indeed, some are undoubtedly already there. When the Israel Defense Forces withdraw, it is essential that they be replaced by internal security forces within the populated areas, as well as mobile patrols in more remote regions, to impede the formation of terrorists cells, prevent the covert storage of arms caches and apprehend wandering bands of PLO gunmen. Again, responsible authorities and security forces must have a strong commitment to perform their mission diligently.

To build confidence and reduce the possibility of surprise attack, arrangements for technical means of surveillance of air and sea movements over and near southern Lebanon should be made. Surveillance is essential for early detection of any PLO buildup or Syrian moves across Lebanon to attack Israel. Early warning reduces tensions after foreign forces have been withdrawn and limits any temptation to resort to force.

These requests seem both logical and reasonable. Why, then, is Israel being pressured to unconditionally withdraw from Lebanon, and no such pressure is being placed on Syria to withdraw her 35,000 man force in the Bekaa Valley or the large number of PLO terrorists who remained or infiltrated back into Lebanon. It appears that Israel is being pressured to make concessions which if given would endanger her national security while at the same time she is portrayed in much of the media as the obstacle to peace in the Middle East. Pray for America if she turns from her historic support of Israel, the only democracy in the Middle East and one of America’s most reliable allies. 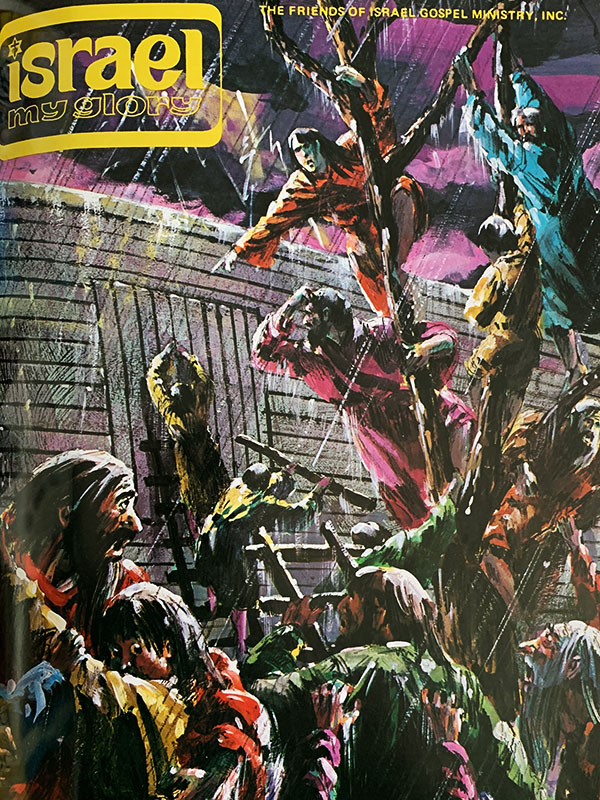