The Time of the Gentiles

* “The times of the Gentiles” is the biblical designation for a period of time beginning with the Babylonian Captivity (606 BC) and ending with the physical return of Christ to the earth at the end of the Great Tribulation.

* This period is defined by the Lord Jesus Christ as the time when Jerusalem (the city of peace to one day be ruled over by the King of righteousness) would be controlled by Gentile world powers (Lk. 21:24).

* Daniel the prophet presents the most comprehensive description of this time period in Daniel 2:4 – 7:28. It is highly fitting and significant that these verses, which depict “the times of the Gentiles”, were written originally in Aramaic – a major language of the Gentile nations – in marked contrast to the rest of the Old Testament which was written in Hebrew.

* These four empires are significant because each in succession ruled a large area of the Mediterranean world – but most importantly, each of these Gentile world powers ruled over Israel. It was because of a decree that everyone return to the city of his fathers to be taxed, made by the fourth Gentile power, Rome, that Jesus was born in Bethlehem (Lk. 2:1).

* A comparison of Daniel 2 and 7 with Revelation 13:1-4 will indicate that the fourth empire, Rome, was never totally destroyed. Only the imperial form of its government came to an end. But, in the end days imperial Rome will be restored. There will be an emperor again (Rev. 13:3), and he will rule over the revived Roman Empire.

* The ten toes of the image in Daniel 2:41 and the ten horns on the head of the fourth beast in Daniel 7:7 and 20 represent ten nations (Dan. 7:24) which will confederate within Western Europe, or the ancient Roman Empire.

* After defeating three of these ten nations, the Antichrist will gain control of and dominate the Mediterranean world over which Rome ruled at her zenith of glory. Empowered by Satan during the last 3 ½ years of the Tribulation period, he will seek to expand his influence to worldwide domination (Rev. 13:7-8).

* Jesus will smite the image on the toes and Gentile domination of Jerusalem will come to an abrupt, catastrophic end (Dan. 2:44-45). The Lion of the tribe of Judah will restore the kingdom of Israel, capital of Jerusalem and throne of King David (2 Sam. 7:8-17). In that day Israel will no longer be the tail of the nations but the head (Dt. 28:13), and the law shall go forth from Zion and the Word of the Lord from Jerusalem (lsa. 2:3).

* It is not without significance that this vision of “the times of the Gentiles” was given to Nebuchadnezzar who ruled over Babylon, the most absolute Gentile monarchy the world has ever known (the head of gold), and interpreted by a Jewish prophet who had himself been enslaved by that Gentile monarchy.

* As if to underscore the truth of this message and to impress it upon the hearts of those who will believe, God has said, “. . . the dream is certain, and the interpretation of it sure” (Dan. 2:45).

* The intent of Daniel 3 is to demonstrate that during “the times of the Gentiles”, the Jews would be supernaturally preserved. Daniel’s three friends, Shadrach, Meshach and Abednego, would be thrown into a fiery furnace – the intensity being underscored by the fact that it was heated seven times more than usual – but the fire would have no power over them (Dan. 3:27). During the past twenty-five hundred years, the Jew has been hounded, hunted and hated, placed in the furnace of persecution – but miraculously, he lives on!

* The intent of Daniel 4 is to reveal that the long course of Gentile world power would be characterized by pride. Daniel warned Nebuchadnezzar of impending judgment if he persisted in his pride – and persist he did. The king said, “. . . Is not this great Babylon, that I have built for the house of the kingdom by the might of my power, and for the honor of my majesty?” (Dan. 4:30). Evidently, for seven long years Nebuchadnezzar was smitten with a mental illness that caused him to think and act like an animal, until he confessed that, “. . . the Most High ruleth in the kingdom of men, and giveth it to whomsoever he will” (Dan. 4:32).

* The intent of Daniel 5 is to illustrate that during “the times of the Gentiles”, men will tend toward idolatry. The new king, Belshazzar, threw a party seldom equaled in history. During the revelry he asked that the vessels taken from the temple in Jerusalem by his grandfather, Nebuchadnezzar, be brought out and desecrated. And, as they drank they praised the gods of silver, and of gold, of bronze, of iron, of wood, and of stone (Dan. 5:4). And in the midst of the debauchery, God wrote with His finger on the wall. Belshazzar’s kingdom would be given to the Medes and Persians. The reason: Though he knew how God had worked in the life of his grandfather, Nebuchadnezzar, he deliberately turned from the true and living God to worship images of silver, and gold, of bronze, iron, wood, and stone, “. . .and the God, in whose hand thy breath is, and whose are all thy ways, hast thou not glorified” (Dan. 5:23).

* The intent of Daniel 6 is to show that the final affront to the God of Heaven during “the times of the Gentiles” is the attempt to deify man, notwithstanding the divine assertion, “. . . my glory will I not give to another . . .” (Isa. 42:8). A royal decree was made under the law of the Medes and Persians (which could not be rescinded) that for thirty days all prayer petitions must be directed to the “man” Darius – ruler of the empire. Daniel, as a godly Jew, could not – would not and did not – bow to worship a man but continued, as was his custom, to worship and pray to his God. As a result, Daniel was thrown into the lions’ den where he was supernaturally protected. Daniel is an illustration of the Jews in the Tribulation who will refuse to worship the Antichrist by bowing to his image (“the abomination of desolation”, Mt. 24:15) in the rebuilt temple. The Apostle Paul, describing this coming event, wrote of the Antichrist, “Who opposeth and exalteth himself above all that is called God, or that is worshiped, so that he, as God, sitteth in the temple of God, showing himself that he is God” (2 Th. 2:4). Infuriated, the Antichrist will seek to persecute these faithful Jews who will flee – probably to the ancient mountain fortress of Petra – where they, like Daniel, will be supernaturally protected for 3 ½ years (Rev. 12:6) from the jaws of the “lion”.

* The intent of Daniel 7 is to show the beastiality of world government during “the times of the Gentiles”, to give further detail concerning the final stage of the Roman Empire, and to give assurance that Jesus will one day return to establish a righteous and just kingdom.

* The four beasts which parallel the image of Daniel 2 are identified as: (1) a lion – Babylon – the head of gold; (2) a bear – Media-Persia – the chest and arms of silver; (3) a leopard – Greece – the belly and thighs of bronze; and (4) a beast not so much identified in Daniel as it is characterized by these words: dreadful, terrible, strong exceedingly, having great iron teeth, devouring and breaking in pieces, diverse from all other beasts, and possessing ten horns (Dan. 7:7). Something of this fourth beast’s appearance may be suggested by Revelation 13:2 where it is described, “. . . like a leopard, and his feet were like the feet of a bear, and his mouth like the mouth of a lion . . . .” That is, the fourth beast, Rome, will incorporate into its system certain ruthless characteristics from its predecessors, the Babylonian, Media-Persian and Grecian empires.

* In Daniel 2, it is the stone cut out of the mountain without hands that smites the image on the toes, and Gentile power comes crumbling down. In Daniel 7, the “Ancient of days” (God the Father) is seen sitting on the throne as the Judge who will destroy the Antichrist (Dan. 7:9-12). And, “one like the Son of man” (Jesus) comes to establish an everlasting kingdom that will never be destroyed (Dan. 7:13-14, cp. Rev. 5). We are moving rapidly and irresistibly toward that day.

*** A few observations may be appropriately shared: 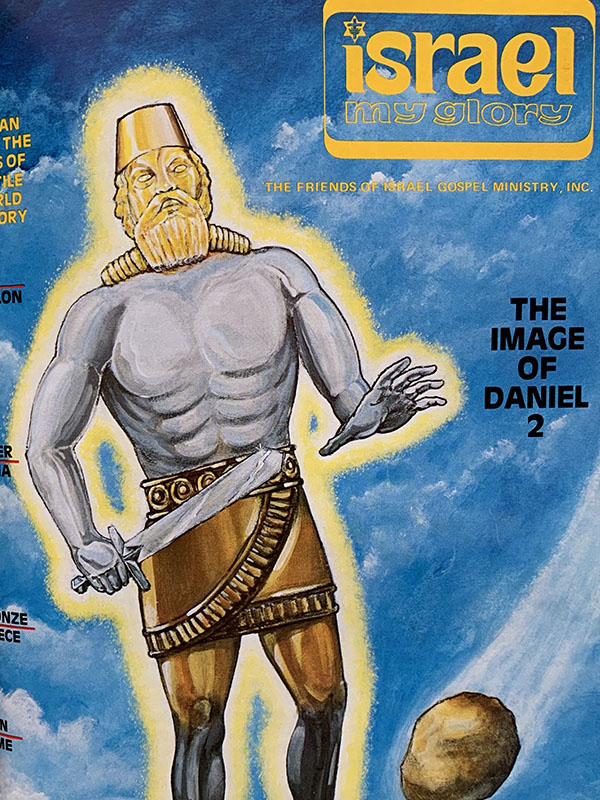