This is the history of the heavens and the earth when they were created, in the day that the Lᴏʀᴅ God made the earth and the heavens (Gen. 2:4).

This key verse both summarizes the opening chapter of the Bible and introduces the second chapter. Note that the heavens and earth were “created” and “made.”

That these two verbs are not mere synonyms is clear from the preceding verse, which says God rested on the seventh day “from all His work which God had created and made” (Gen. 2:3). Although the difference between creating and making may be subtle, in the case of God’s works it is quite real.

In the original text, “create” is the Hebrew word bara, and “make” is asah. The essential distinction is that only God can “create,” whereas man, as well as God, is able to “make” functional systems out of basic entities that had previously been “created.” Thus, whenever the Bible uses the word create, the stated or implied subject is God. Make and made, on the other hand, often have a man as the subject (as well as God), such as when Adam and Eve “made themselves coverings” (Gen. 3:7), trying to hide from God after they had sinned. Later, “God made tunics of skin, and clothed them” (Gen. 3:21).

God’s Three Acts
It is significant that only three acts of divine creation are mentioned in the great creation chapter that begins the Bible.

Thus God created only the basic physical, biological, and spiritual realities of the universe. Upon these fundamental entities, however, God then proceeded to make many complex systems. For example, “God made the firmament,” the “two great lights [sun and moon]” and “the stars also,” plus “the beast of the earth…cattle…and everything that creeps on the earth” (vv. 7, 16, 25).

As far as the spiritual universe was concerned, however, the only system He made was man: “Then God said, ‘Let Us make man in Our image, according to Our likeness;’…So God created man in His own image” (vv. 26–27). That is, man was both created and made in the image of God. He was created as a spiritual being, able to have fellowship with His Creator. He also was made (from the previously created “dust of the ground,” 2:7) in the physical image that God would assume one day when He would himself become a man.

The world’s strictly material objects (including even plants, which are complex reproducing chemicals but do not possess conscious life) thus share the physical creating and making handiwork of God. Animals, on the other hand, are both physical and biological systems created and made by God. Men and women alone, however, are physical, biological, and spiritual beings, created and made in the image of God.

Evolution’s Scenario
That all seems reasonable, as well as biblical. But what do scientists say about it? The sad fact is that the modern scientific and educational establishments are almost completely committed to total evolutionism. They maintain that the physical universe evolved from nothing at all by a kind of quantum leap from nothing into an infinitesimal particle of space-time. This primeval particle rapidly inflated and then exploded into the so-called Big Bang. From this the universe has been rapidly expanding ever since, somehow enabling stars and galaxies to form, then planets.

On this Earth planet, and perhaps others, the nonliving chemicals in the primeval seas somehow came to life as primitive reproducing cells. These developed into multicelled marine invertebrates, then into fish. Some of these fish became amphibian, then turned into reptiles. One or more of the latter evolved into birds, while other reptiles were evolving into mammals. Finally, one mammalian line developed into the primates, and some ape-like creature in this line became man.

That scenario—believe it or not—is essentially what is taught as absolute fact in practically every school in the Western world, from elementary grades through graduate school. It also dominates the news media and the legal and political systems.

But the remarkable fact is that the real facts of science do not support it at all. As a result, literally thousands of fully credentialed scientists have repudiated it altogether in recent decades and become believers in special creation.

This wonderful first chapter of Genesis also reveals two other vital facts. Ten times the animals, as well as plants, were made able to reproduce only according to their “kind,” never according to a different kind. Whatever the created “kind” may have represented, it could never evolve into a new kind. The respective genetic systems permitted much variation (no two individuals are alike), even the formation of stable “varieties,” but nothing more.

Second, everything was “very good” (v. 31). Nothing bad existed anywhere in the universe—no sin, disharmony, pain, and especially no death. All these came only after sin came—first through Satan and his angels, then Adam and Eve.

God then cursed the ground (that is, the basic elements out of which He had made all things). “By man came death” (1 Cor. 15:21). Since then, “the whole creation [that is, all its physical, biological, and spiritual components] groans and labors with birth pangs together until now” (Rom. 8:22). Everything in the physical realm tends to return to the dust from which it was made, just as Adam’s body did (Gen. 3:19). All biological life forms eventually die, although the “consciousness” aspect of human life survives, eventually to be reunited with a resurrected body when Christ returns. The “image of God” in man has been badly marred but can be “renewed in knowledge according to the image of Him who created him” (Col. 3:10).

Evolution’s Dilemma
True science does not support the evolutionary worldview. It does support the biblical worldview, however. For example, the two most universally applicable and best-proved laws of science point absolutely to the primeval creation of the universe, not to its evolution out of nothing. These are the First and Second Laws of Thermo -dynamics, or, one might say, the laws of quantitative conservation and qualitative decay of all things. The First Law confirms that neither matter nor energy is now being either created or destroyed, as stated in Genesis 2:3: “He rested from all His work which God had created and made.” The New Testament confirms that our Creator is now “upholding all things by the word of His power” (Heb. 1:3).

This fact assures us that the universe could not have created itself because, by the First Law, none of its present process can create anything. Yet the universe must have been created at some time in the past because the Second Law tells us that everything is now running down, heading toward stillness and “death.” This situation, of course, is also the implication of God’s curse on “the whole creation.”

Now, if the universe could not have created itself (by the First Law) but must have been created somehow (since it is not dead, though heading inexorably toward death by the Second Law), the only answer is that God created it! That is the most scientific conclusion possible on the basis of the best scientific laws we have.

This Second Law also makes it clear why no one has ever proved any case of vertically “upward” evolution from one kind to a higher, more complex kind. In all human history, no one has ever documented any such “macroevolution.” There have been many cases of “horizontal” variation (e.g., the different species of dogs) and downward variation (mutations, extinctions, deteriorations), but nothing else.

In the fossil record of the past, with billions of known fossils, there are many examples of extinct kinds (e.g., dinosaurs) but not one known transitional series of a lower kind into a higher kind. As atheistic Harvard professor Ernst Mayr, generally acknowledged to be the greatest living evolutionary biologist, has admitted in his most recent book, “The fossil record remains woefully inadequate” to prove evolution.1 Furthermore, those billions of fossils all speak eloquently of a suffering, dying world. They must have been buried, therefore, only after man brought sin into the world.

The evolution of life or of any living kind has never been recorded in the 6,000 years of written history, and there are no evidences of it in the fossil record of the past. The reason why it has never been observed is that it cannot happen: The Second Law of Thermodynamics tells us that evolution would be impossible without continuous, miraculous intervention by God. And He has pronounced the biogenetic law to be “according to its kind.”

God can intervene when there is special reason to do so. For example, on one occasion He miraculously caused water to “evolve” instantaneously into wine (Jn. 2:7–11). He is still the Creator and can still perform miracles of creation when the occasion justifies. But evolution, which men commonly try to use to do away with the need for God, is not one of them. 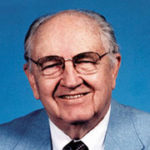 Henry M. Morris is the author of more than 45 books on creation/evolution and is the founder and president emeritus of the Institute for Creation research in El Cajon, California.

1 thought on “The Truth About Creation”

The Flip Side of Disengagement

Israelis are being expelled from the land they worked so hard to cultivate. Will this bring peace to the region? You be the judge.

Modern science is almost completely com- mitted to evolution. But the bona fide data shows the theory is definitely fiction, not fact.

Does the theory of evolution involve more than “science”? You may be surprised what this view actually encompasses.

The Jewish people of old knew much more about God than did the pagan Greeks. Learn what it takes today to reach the new pagans with the truth.

It was called the “trial of the century.” Eighty years ago this month the Scopes trial brought evolution to the forefront in American education.