It was near the conclusion of His earthly ministry that Jesus confirmed the certainty of a future kingdom upon the earth. Intertwined with that truth was the promise that He himself would return to establish and maintain this earthly kingdom, and in so doing bring to fruition the messianic prophecies left unfulfilled during His first appearance.

The Olivet Discourse, recorded in Matthew 24 and 25, is one of the most important prophetic portions of the Word of God. Its correct interpretation requires the recognition of the far-reaching context in which these events are surrounded. The context goes far beyond the chapters which immediately precede and follow. It engulfs the Gospel of Matthew as well as the entire Old Testament.

The central theme of the Old Testament can be succinctly summarized. Simply stated, God promised that He would make it potentially possible for man to be reconciled unto Himself. Achievement of this miraculous mission would come via His Son, through the seed of Abraham, Isaac and Jacob. This Son would not only provide eternal redemption for those coming to God through Him, but He would one day wrench the earth out of the hands of Satan, the usurper, and restore to man the earthly kingdom lost through the fail of Adam.

The Gospel of Matthew reveals the entrance of God’s Son into the mainstream of humanity as Israel’s promised Messiah-King prepared to inaugurate the earthly kingdom (Mt. 1-9). Early in the ministry of Jesus it became evident that Israel, misled by her leaders, rejected Him as their promised kingly Messiah. With genuine repentance withheld by Israel, Jesus revealed the postponement of His earthly kingdom (Mt. 10-23).

Deferment of the kingdom does not reflect negatively upon the sovereign omniscience of God, but rather should be viewed as the result of official rejection of His messianic claims which God foreknew before the foundation of the earth. During this interim period, God is establishing the Church.

God’s faithfulness to His Word, wed to His attribute of immutability, emphatically demands and assures the establishment of a literal kingdom upon the earth. The Second Coming, which Jesus himself promised, will literally fulfill the messianic prophecies relating to the kingly Messiah in the same manner as He precisely fulfilled the prophecies concerning the lamb-like, suffering Messiah at His first appearance (Zech. 9:9-10; Isa. 53).

Ignorance of the Second Coming is Inconceivable

And as he sat upon the Mount of Olives, the disciples came unto him privately, saying, Tell us, when shall these things be? And what shall be the sign of thy coming, and of the end of the age?

The Olivet Discourse stemmed from the disciples’ two-part question concerning the destruction of the Temple, as well as His Second Coming and the end of the age. The questions were evidently prompted by the recent startling statements of Jesus. In Matthew 23:37-39, Jesus lamented over the failure of His brethren (the Jewish people) to receive Him as their Messiah-King. He stated prophetically that Israel would experience a spiritual drought until His Second Coming. Furthermore, He prophesied the destruction of the Temple buildings, “. . . There shall not be left here one stone upon another . . .” (Mt. 24:2). The disciples connected the destruction of the Temple with the absence of the Lord and His subsequent return. Thus, they wanted to know how to recognize His coming and also the end of the age.

Accompanying the Lord’s return will be a series of catastrophic, cosmic events that have no parallel in history. This occasion will be so awesome and monumental that Jesus states every tribe on earth shall mourn and every human being who is still alive shall see Him at His coming (Mt. 24:27-30).

The sign of the end of the age can be summed up in one word . . . TRIBULATION (Mt. 24:29). In Matthew 24:5-26, Jesus set forth many details of this one sign. His response to the disciples’ question revolved around the seven-year Tribulation Period, which immediately precedes His physical return to the earth. They knew nothing about a long interlude of time (the Church Age) which would elapse between their day and the day in which the Lord would return.

The description of the first half of the Tribulation foretold by the Lord in verses 5-14 closely parallels that of the four horses and horsemen of the apocalypse prophesied in Revelation 6:1-8.

Common to both of these portions of the Word of God is (1) the appearance of false christs and dictators, (2) bloodshed through wars, (3) worldwide famine, and (4) pestilence, all culminating in chaos, confusion, and mass death.

Matthew 24:15-26 unmistakably refers to the horrid events of the second half of the Tribulation Period. First, this is evidenced in the Lord’s equating this future period with Daniel’s “abomination of desolation” (Mt. 24:15; Dan. 9:27). Second, He refers to this period as the “great tribulation” . . . the worst time in all of history (Mt. 24:21). This then leaves no room for doubt that He was referring to the second half of Daniel’s 70th week – the last half of the seven-year Tribulation which culminates with His return to the earth.

Indifference Towards the Second Coming is Irreconcilable

The disciples received much more than they sought for. Jesus, not only answered their questions concerning the sign of both His coming and the end of the age, He went much further. He used this occasion to give a word of exhortation to those who would be living during the time just before His return to be watchful, prepared and faithful in light of His soon return (Mt. 24:32 25:30).

Fundamentally, what He said was that the truth of His soon return should have a profound effect upon the believer. One’s life should reflect one’s belief. Each of the examples and illustrations which Jesus taught were relevant to His soon coming to establish the literal kingdom upon the earth. In this context, He was making reference to the people who would be alive in the Tribulation Period. The entire context, as has already been pointed out, is the period just prior to the Messiah’s return to the earth. The Church is nowhere in view in this portion of the Word of God. The disciples were not cognizant of the Church Age which would exist between the two advents of the Messiah. The proper interpretation singularly points to Daniel’s 70th week . . . the Tribulation Period.

The following illustrations are just two of seven which Jesus gave:

The key concept here is in the latter part of verse 33 and in verse 34. The people who will be alive to see all of these things – the sign of the end of the age, the Tribulation, as detailed in the first half of this chapter – will know that His coming is just about to take place. The illustration in verse 32 is an axiomatic truth. The budding of the fig tree simply announces the closeness of summer; likewise, the events of the Tribulation Period reveal the closeness of the return of the Lord. In view of this, those living in the Tribulation Period should not make light of the soon return of the Lord.

At the end of the Tribulation Period when Jesus returns, He will remove the unrighteous from the earth and reward the living believers by permitting them to enter into the Millennial Kingdom (cf. Mt. 25:31-46). Hence, the one taken in the field and the one taken from the grinding mill are the wicked or unrighteous being removed from earth, while the remaining ones are the believing remnant who will populate the earthly kingdom. A quick review of the preceding verses concerning Noah confirms this interpretation (Mt. 24:37-39). When the flood came, righteous Noah and his family were the only ones to remain on the earth alive – while the rest of the unrighteous population on earth were removed. (v. 39) “. . . so shall also the coming of the Son of man be”.

Further verification comes from the parables Jesus taught in Matthew 13, specifically those commonly referred to as the wheat and the tares (Mt. 13:24-30, 34-43), and the dragnet (Mt. 13:47-50). In both instances, the end of the age and inauguration of the kingdom coincide with the separation of the unrighteous from among the righteous.

The weeding of the wheat field is shown to be a dangerous process which will have to wait until the harvest, at which time the tares shall be separated and burned. Jesus, in His interpretation of this parable, likens the wheat unto God’s children and the tares to the children of Satan, and the harvest is likened unto the end of the age. This then teaches the coexistence of the unrighteous with the righteous during the Church Age and the separation of the unbelievers from the believers in the kingdom.

While there is only one valid interpretation of the Word of God, many applications can be made. Such is the case here. Believers in the Church Age are exhorted to look for the Rapture – the “catching away” of God’s people (1 Th. 4:13-18) which will occur before the Tribulation.

In light of the shadows of the Tribulation Period seemingly evidenced today, the Church should be exhorted by this portion of the Word of God to be watching, prepared and faithful.

Intolerance of the Lord’s Brethren is Inexcusable

In this final segment of the Olivet Discourse, Jesus is seen sitting upon His rightful throne judging the Gentiles (the nations). This judgment decides who will be blessed by inheriting the literal earthly kingdom, and who will be cursed by being discarded and eternally separated from God (Mt. 25:31-46).

Ground for this judgment is based upon the treatment of Jesus’ brethren, the Jewish people, in the Tribulation Period. Because of the severity of anti-Semitism which will be evident during this period, God’s sensitivity concerning the nation of Israel, His chosen people, is heightened (cf. Mt. 24:21; Zech. 2:8).

to the system established by the false christs and dictators, which Jesus referred to in the earlier part of the Olivet Discourse. Those who respond in a positive manner to the needs of the Jewish people will be blessed, while those who purposely refuse to do so will be cursed.

This is not to be misunderstood as a “works” way of salvation, but rather substantiation of a true relationship with God. If one really has accepted Jesus as his Messiah-Redeemer, then he will look upon the Jewish people, the Lord’s brethren, as if they were Jesus himself.

The blessing and cursing resulting from one’s treatment of Jewish people will reach its zenith in the Tribulation Period; however, this principle has been factual truth for the past four thousand years and will continue to be so throughout earthly history (Gen. 12:13). While the Scriptures do not teach a divine judgment of the Church or individual Christian in the manner as will be evidenced in the Tribulation Period, the promise of blessing and cursing is nevertheless as relevant in our period of time as it will be then.

One’s life should reflect one’s belief – one’s belief should be evidenced in one’s life. Either way you state it, the result is still the same: You are what you believe!

* Do YOU believe He is literally coming again?
* Is YOUR lifestyle in harmony with your belief?
* Is YOUR relationship to the Jewish people acceptable to God? 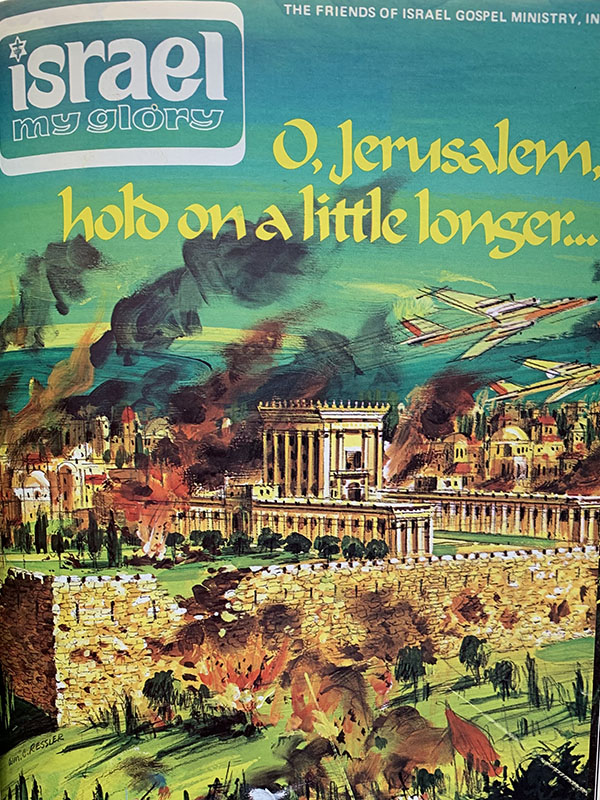