Who’s at the Controls?

Dramatic events played out in areas of the world far removed from one another often appear and are, in fact, unrelated. Occasionally, however, a cohesive dimension developing on a larger scale reflects the fact that those who appear to be orchestrating events are not, in actuality, controlling the outcome.

Immediate examples are being played out in Russia and the Middle East. The bloody days of Boris Yeltsin’s suppression of rebellious, hard-line opponents in the Parliament shut down, at least in the short run, determined communists who wanted to turn back the clock and return the nation to the old ways of failed, atheist-driven socialism. Although it is much too early to predict what will rise out of the charred ashes of Russia’s White House—democracy or dictatorship—more conflict is a certainty.

If…dissolving the Parliament relieves the pressure on Yeltsin to comply…it will be a long step in the right direction.

Of Yeltsin’s initial actions and subsequent decrees, two especially deserve comment. The dissolution of the Parliament may also have nullified the legislators’ recent decision to severely restrict evangelical Christian activity and literature distribution in Russia. The move was driven by leaders of the establishment churches, who were less than happy to see their monopoly on religion being eroded by other Christian organizations responding to the spiritual starvation created by the years of communism. Ostensibly, these religious leaders were moving against some unsavory elements that came into the country to exploit the situation—a fact that was no doubt the case. Cultists and crooks inevitably don the mantle of religion and attempt to seize whom and what they can when the opportunity presents itself, as it has in the former Soviet Union. The end result of the legislation, however, would have imposed severe limitations on those groups constructively serving the spiritual and often physical needs of millions of needy people. If, indeed, dissolving the Parliament relieves the pressure on Yeltsin to comply with the religious/communist coalition’s decree to control the dissemination of Christian truth and mercy missions to Russia, it will be a long step in the right direction.

Another noteworthy decision was the reported rejection of Pamyat as a viable political party. As observed in this space on several occasions, Pamyat is a group devoted to neo-Nazi actions and attitudes against Jewish people. Members of Pamyat were implicated in the attempted coup against Gorbachev in 1991. If Pamyat has indeed become a political pariah, it does not follow that their anti-Semitic fervor will diminish. On the contrary, it will most probably fuel anti-Semitic ravings about another regime fallen to subversive Zionists. Signals are already being sent. The Washington Post reported a conversation with a Russian woman who said, “Jews are flourishing everywhere in Russia while we are dying. They control everything. Yeltsin is a puppet in their hand.” Other demonstrators were chanting “Beat Kikes [Jews]. Save Russia.” This new wave of the tired old theme has not gone unnoticed by the one million plus Jews in the region who have signed applications for exit visas and are awaiting better days in Israel before heading home.

On the Middle East front, the “peace accord” program between the PLO and Israel bumps along a precipitous path. Cries for a referendum on the accord are coming from both sides of the line. Polls report that Israeli Jews and Arabs favor, by more than 81%, putting the issue to the people. Even though a majority of Israelis favor a settlement or the Palestinian issue, security considerations and a lack of trust in Arafat’s intentions continue to plague the process. Is the resilient old terrorist, after all, only a chameleon in a kaffiyeh, temporarily changing colors in hope of positioning himself to deliver a knockout blow to Israel from his hoped-for Palestinian state? Time will tell, but early signs call for a very firm hand on the process and on a “leader” who has never been trustworthy in the past.

King Hussein of Jordan frets that Palestinian expectations are being raised to unattainable heights and may, in the end, create greater problems. The king has a legitimate cause for concern because Yasser Arafat has, before and since the accord was signed, been openly promoting notions not incorporated in the agreement and certain to accelerate controversy over the entire process. Three major areas can be mentioned.

The idea is as obvious as it is untenable. Packing Israel proper with enough Palestinians to dilute the Jewish presence is as practically acceptable as telling all Jewish refugees from Hitler’s Europe and oppressive Arab countries (such as Iraq) to return and expect to retrieve homes, businesses, and bank accounts left behind. Even though this fantasy finds some legitimacy in the reasoning of U.N. wishful thinkers, it makes as much sense as suggesting to the United States that Texas be returned to Mexico.

The West is hoping, of course, that the infusion of large sums of money into the Palestinian economy will save the day by negating support for militant Muslim terrorists within the territories and give Arafat the means to refurbish his faded fortunes and establish himself as a credible alternative to hard-liners. Given the track record of money for peace, or money to accomplish any number of international objectives, however, is, to say the least, a tenuous venture—a path mined with the potential for catastrophe.

Yasser Arafat…is anything but a cuddly, folksy plaything of the press and photo-opportunity politicians.

If a measure of serenity for Palestinians and Israelis can be achieved for the short run, and all sides hope for this, it must be serenity rooted in reality. Unfortunately, American legislators and secular media moguls were inexplicably moved to make Arafat an instant celebrity when he rolled into Washington to sign the accord. Basking in folk-hero status from the press and autograph-seeking Senators and Congressmen, Yasser was in his element and obviously hoping for bigger and better things. Such adulation without cause can lead to disaster. In truth, Yasser Arafat, who is already picking up international peace prizes, is anything but a cuddly, folksy plaything of the press and photo-opportunity politicians. For more than thirty years he has engaged, officially and personally, in terrorism and the killing of innocent people—Jews, Arabs, and anyone else who stood in his way. Those who are willing to listen can still hear echoes of Arafat cheering the Iraqi scud that slammed into the barracks of American troops in Saudi Arabia during the Gulf War.

While, yes, it is possible that this terrorist tiger is willing to change his stripes, caution must be the order of the day. Israel’s national security and the preservation of the integrity of the nation are really what is at stake. America, with its historic Judeo-Christian commitment to the rights of the Jewish people to a secure home in the land of their fathers, must put people into the process who are concerned with the fundamental issue at stake rather than those who put out a hand first or wear the broadest smile. American representatives must steadfastly resist attempting to push Israel into untenable, “give them all they want to prove your sincerity to us and the world” positions. If the design is to make war and not peace, this is the surest way to do it.

If the process becomes—and it assuredly will—larger than Yasser Arafat and is tempered with realism in the realm of what is reasonably attainable and not fantasized, it has longed-for possibilities and the best promise for a measure of interim peace. Beyond the situation immediately before Israelis and their Arab neighbors is the question of what it can do for those Jews who stand, visa in hand, in Russia.

Peace in Israel would enhance prospects for Jews who believe the time has come when they must escape the shackles of the collapsed Soviet empire. We are not remiss in encouraging Western peace seekers to be as eager to finance the resettlement of a million more Russian Jews to Israel as they are to aid Israel’s former foes.

Above the events on the world scene is reassuring evidence that when such convergence of possibilities is suddenly created in places far removed from one another, someone above the scene is ultimately at the controls of history. We can all take comfort in that fact. 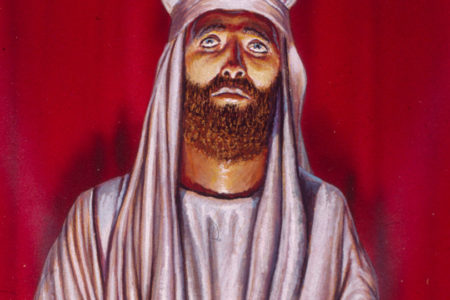