How to Spell Blessing: Israel

For many people today, the word Israel in the Bible no longer means “Israel.” But redefining the term not only hurts the Jewish people, it hurts the Gentiles as well.

We live in a world of widespread redefinition. Some people view the practice as a positive modification to an old, outdated understanding of certain terms and practices, while others see it as a fundamental loss.

The redefinition of marriage represents the most glaring contemporary example. The word has been reformulated to mean more than the God-ordained union of one man and one woman for life. It now includes the union of two men or two women.

Though some view this change as a gain, it is actually a fundamental loss. It has eroded the foundational meaning of marriage, and it’s only a matter of time before society loses the original definition altogether.

Redefinition causes the same essential loss in theology. One of the common biblical redefinitions concerns Israel. For some, Israel does not mean ethnic Israel. Some say it refers to all believers throughout history and that the church is a replacement for, or continuation of, the Old Testament’s ethnic Israel. Yet any redefinition of Israel turns it into an entity that is completely different from what God intends.

As with the redefinition of marriage, redefining Israel presents significant loss. If we take Israel to mean anything other than national, ethnic Israel, we not only strip Israel of God’s future blessing but we strip Gentile believers of it, as well.

Get out of your country, from your family and from your father’s house, to a land that I will show you. I will make you a great nation; I will bless you and make your name great; and you shall be a blessing. I will bless those who bless you, and I will curse him who curses you; and in you all the families of the earth shall be blessed (Gen. 12:1–3).

The Jewish people call Abraham their father because of this promise, known as the Abrahamic Covenant (v. 2; Jn. 8:53, 56; Acts 3:25; 7:2). Nowhere in the Bible does God nullify, abrogate, or redefine this promise. The covenant was physical, unconditional, and eternal (Gen. 17:7–8); and the apostle Paul said even Israel’s sin could not separate God from His people or cause Him to reject them or rescind His promises to them (Rom. 11:1).

It is difficult to comprehend how someone could redefine Israel to mean anything other than national Israel since God’s promise to Abraham of a nation, land, and seed was made by an everlasting covenant. Redefining this term takes away the Jewish people’s nationhood, land, and divine blessing.

However, the loss is not confined to Israel. Gentile nations also lose the promise of God’s blessing as they bless ethnic Israel. If Israel is not truly Israel, there remains no Israel to bless and, therefore, no blessing for Gentiles. Without national Israel there is no Abrahamic Covenant for Jew or Gentile.

Loss of Promised Comfort and Restoration
Reports of violence, destruction and devastation bombard us daily. But our suffering in the West does not compare to Israel’s history of suffering. History overflows with  anti-Semitism, pogroms, the Holocaust, and utter hatred of the Jewish people. Psalm 83:3–4 captures the continual evil Israel faces:

They have taken crafty counsel against Your people, and consulted together against Your sheltered ones. They have said, “Come, and let us cut them off from being a nation, that the name of Israel may be remembered no more.”

However, in the midst of such horrible and continual wickedness, God promises future comfort, safety, and restoration. He recognizes Israel’s tenuous position and has promised joy:

Whereas you have been forsaken and hated, so that no one went through you, I will make you an eternal excellence, a joy of many generations. Violence shall no longer be heard in your land, neither wasting nor destruction within your borders; but you shall call your walls Salvation, and your gates Praise (Isa. 60:15, 18).

A day is coming when Israel will no longer experience violence at the hands of its enemies but will dwell in perfect security. Ethnic Israel possesses a divine promise of comfort in the regathering of its people (v. 4). God also promises the nation wealth (vv. 5–6, 9), a new Temple, the reinstitution of Temple sacrifices (v. 7), and recognition as the leading nation of the world (vv. 12–14). But most thrilling is that the Lord Himself will dwell in Israel’s presence, and Israel’s people will be righteous before Him and enjoy His divine favor forever (vv. 10, 16, 19–21).1

If Israel does not refer to ethnic Israel, what comfort would these promises have provided the believing Jewish remnant in Isaiah’s day? Isaiah’s audience looked forward to a time when Israel would no longer be hated or forsaken (v. 15).

Israel still looks forward to a future when God’s promises will be fulfilled. If they’re not fulfilled as stated—if God does not fulfill His everlasting covenant to Israel—then we might question God’s integrity.

Redefining Israel not only robs the Jewish people, but it also cheats Gentiles of a future time of worship and blessing in Jerusalem with them (vv. 11–12).

Loss of the Promise of God’s Integrity
God does not lie. What He says, He will do. The Bible, especially the Old Testament, contains many future prophecies conferring divine promises on national Israel. These promises gave the Jewish people hope, comfort, encouragement, and motivation for holy living in the past; and they continue to do so today.

For God to replace or redefine Israel, He would have to lie and subvert His own Word.

If God were to redefine Israel and thus negate His prophecies concerning it, why should we trust Him to keep His Word to us? What is our faith built upon if not God’s Word? A trustworthy God keeps all His promises—to Jew and Gentile alike. God Himself declares,

Thus says the LORD, who gives the sun for a light by day, the ordinances of the moon and the stars for a light by night, who disturbs the sea, and its waves roar (The LORD of hosts is His name): “If those ordinances depart from before Me, says the LORD, then the seed of Israel shall also cease from being a nation before Me forever” (Jer. 31:35–36).

Today the sun still shines. The moon and stars still stand in their appointed places, and the sea waves still rise and fall. Using these four elements—sun, moon, stars, and sea—God Himself declares the permanency of His Covenant with Israel. God has not redefined Israel or cast off His Chosen People.

Theological redefinition robs Israel of its rightful place in God’s continuing program, Gentiles of their blessings for blessing Israel, and God of His integrity. Redefining Israel is not a gain but, rather, a profound loss for Jew and Gentile alike. If God has not redefined Israel, neither should we. 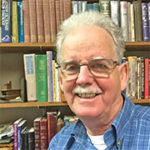 Mark McGinniss is professor of Old Testament literature, languages, and exegesis at Baptist Bible Seminary in Clarks Summit, Pennsylvania. He is also editor of The Journal of Ministry and Theology.

1 thought on “How to Spell Blessing: Israel”

David Mappes
Share Your Story. Has God used The Friends of Israel Gospel Ministry in your life? Share your story with us!