Stories from the War–Cecilia Stark

Israeli journalist Elliot Jager conducted this interview with Cecila Stark. She is a semi-retired tour guide specializing in Christian visitors. 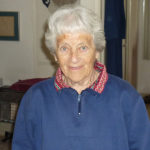 I was born in London and came to Israel in 1963. When I arrived in Jerusalem, the city had a small-town feel. There were around 165,000 people in western Jerusalem. There was one traffic light—at the intersection of King George, Strauss and Jaffa Streets. When you wanted to meet someone in town, you’d say, “I’ll meet you at the traffic light!”

There were not many cars. The buses were creaky, and you might be sitting next to someone who was bringing home a live chicken from the market. We had iceboxes instead of electric refrigerators. There were no gas ovens; we cooked and heated our homes using smelly kerosene heaters.

Life was very basic. There was not much variety in foods. We couldn’t get Nescafe instant coffee, so we used to ask visitors to bring it. Even toilet paper was not easy to come by. So that was Jerusalem on the eve of the war.

I had trained as a teacher, and my first job was teaching English to new immigrants in the town of Beit Shemesh [18.6 miles (30 km) west of Jerusalem]. Like me, they didn’t have much Hebrew. That lasted about a year until I went to work for the Jewish Agency.

When the war broke out, I was working in the unit that coordinated logistics for visiting professional and youth groups. The idea was to expose the visitors to life in Israel in the hope that they’d decide to immigrate.

In those days, if we wanted to catch a glimpse of the Old City, one option was to climb up to the roof of the Catholic-run [St. Louis] French Hospital on Shivtei Israel [Tribes of Israel] Street. There was the tale of a nun who leaned out the window from the hospital, and her false teeth fell out. The sisters had to get the UN to arrange for the dentures to be retrieved because they’d fallen into the demilitarized zone between Israel and Jordan.

Jordanian snipers atop the Old City walls would take occasional shots at passersby. A barrier was erected to protect people from getting shot.

We knew there was going to be a war. There was a sense of tension. The men went into the reserves. The Jewish Agency shut down many of its offices, and we were all concentrated at headquarters on King George Street. For the 10 preceding days, we were walking around with toothbrushes and a change of underwear in our bags. We didn’t know where we were going to be when the war started.

All the time I worried I would not recognize the air raid siren. Anyway, I heard it! They took us all down to the Jewish Agency’s basement shelter. My boss at the Jewish Agency came along and said, “Look, I want to go home to my family. And I want to make sure you all get home safely too.” There was an American girl who worked there with me. She lived on a street nearby. My boss could not get me back as far as my place, so I went back with her. We stayed in her shelter. Now you have to remember, [western] Jerusalem in those days was a demilitarized zone. You never heard an aeroplane or saw a tank. But the week before the outbreak of fighting, every night there had been [Israeli] tanks coming up [to Jerusalem]. So from the shelter, you could hear the rumblings of military vehicles. People were talking about Egypt’s claims that it was winning. After they began shelling us, the Jordanians were expecting an attack from west Jerusalem, but the IDF [Israel Defense Forces] came around the back way—the same way the Maccabees did [in 164 BC]. Many of the battles described in the Bible were surprise attacks by the Israelites.

The radio [in Hebrew] wasn’t so clear, and the situation was scary. The home guard kept coming in to the shelter every few hours to check on us and to tell us what was really happening. The home guard would let us go upstairs, in turns, to wash and come straight back. By Wednesday morning [June 7], the home guard came in and told us that our boys were at the Western Wall [in Jerusalem’s Old City]. Back in England, my mother was watching the war on TV. I waited three days after the war for an operator to place my call to London. I had no phone of my own, but she did manage to get through and speak to a relative who had a phone. Afterwards, one of the first things we did—it was on Shavuot [Pentecost]—was go to the Western Wall. We entered through Zion Gate. The Arabs there were under curfew. The army created a line of soldiers to watch over us. On the way back out, we walked through the Christian quarter and through the shuttered Arab market exiting at the Jaffa Gate.

When the situation allowed, the Arabs from the Jordanian side of Jerusalem began visiting our side of town. They were in total shock because west Jerusalem was so developed!

Today, I live nearby Ammunition Hill, which, during the war, was the site of a major battle. It is a war memorial now, and you can still see the trenches and bunkers….There was nothing here when housing construction began….When this [northern] part of the city was captured, one of the first things the authorities did was open a boulevard called Sderot Eshkol. That was to enable ambulances and people to access the newly reopened Hadassah Hospital branch on Mount Scopus. When it was all over, I recall that the Jewish Agency took us on a bus tour to Jericho. Arab vendors were selling everything for a dollar. I still have the souvenir clay jug I bought.

After that, I went back to work at the Jewish Agency and helped coordinate the volunteers who were pouring into the country, arranging where they’d be assigned. There were Jews and Christians volunteering, and the kibbutzim [agricultural communities] were delighted for the help because their men had not yet been demobilized.