Stories from the War—Rosie Gordon Elkana

[Israeli journalist Elliot Jager conducted this interview with Rosie Gordon Elkana. She is a retired registered nurse, wife, mother, grandmother and great-grandmother who loves painting and volunteering to help children with special needs.] 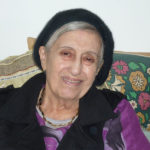 I immigrated to Israel from Edinburgh, Scotland, in 1964. By then, I was already a registered nurse, having trained at Manchester Jewish Hospital in England. Right away, I got a job at Hadassah Hospital Ein Karem. The hospital’s Mount Scopus campus was inaccessible because it was surrounded by Jordanian-held east Jerusalem.

As the crisis deepened, the entire staff had been called into the hospital. It was a waiting period. Nothing happened. There was a spirit of solidarity in the air. Shuli Natan’s voice singing “Jerusalem of Gold” [composed by Naomi Shemer] filled the radio airwaves. And then suddenly the war began.

Patients at Hadassah Hospital who were too sick to be sent home were brought to the basement, and many beds were lined against corridor walls. I was assigned to deal with the general patients, not the war-wounded.

We were on a war footing, so there were no nonemergency services. We worked 12-hour shifts with hospital vans serving as transport to take us home since municipal bus services had been suspended.

I remember that my friend Beryl was supposed to be getting married on June 6. I was trying to contact her…but there was no way. Later, I learned she had gotten married at the rabbinate after all.

My fiancée Shimon had been called up. He helped capture Nabi Samwil [the Tomb of Samuel, which sits strategically 3,000 feet above sea level looking down on Jerusalem from the north]. Shimon’s unit then remained there to guard the position.

Back at the hospital, there was palpable tension, especially in the first days of the fighting. We became fearful of an [Israeli]-Arab doctor working in the hospital. In hindsight, our qualms were uncalled-for, but our suspicions reflected the anxiety we all felt at the time.

Truth is I was so cut off—working so hard—that I didn’t realize Jordan had entered the war, or what was happening in the war. And then it was over.

After the war, it was Shavuot [Pentecost], and I remember walking to the Western Wall. What a special experience that was. We walked down Jaffa Street [Jerusalem’s main thoroughfare], and the barriers were gone. We could now continue to the Old City. The IDF [Israel Defense Forces] had created a corridor. By this time, the IDF had bulldozed the area in front of the Western Wall so that it was possible to access the site.

Within days after the war ended, Shimon’s mother, who had emigrated from Afghanistan before the state [of Israel] was established, resumed shopping in the Old City. A few of the Arab stall owners whom she had frequented before 1948 recognized her. I remember she used to buy olives in the souk [Arab market]. With the war over, our medical team was taken on a tour to Jericho [near the Jordan River], and we bought bananas—which I think had not been generally available. In those days, of course, eating bread and halva [dessert made from tahini or sesame paste] was considered a big treat! Simpler times.

After the war, when Hadassah’s Mount Scopus compound was reopened, I worked in the internal medicine wards and later at the well child health clinic for many years.

Today, I live in Ma’alot Dafne—a bustling neighbourhood—which had been a barren no-man’s-land in 1967.

When I think about those days…it was a time of miracles. Amazing.