Stories from the War—Naomi Paynton

[Israeli journalist Elliot Jager conducted this interview with Nomi Paynton. A retired psychotherapist, Nomi is a gifted ceramist whose work is displayed at Shlomzion Ceramics in downtown Jerusalem.] 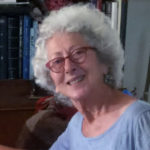 I arrived on June 10, 1967, on a special El Al flight for war volunteers. It came from Paris, where I lived at the time. It was packed and quite frightening. We did not know what we were coming to. They did not give us the usual meal, but just a packet of dried crackers and a triangle of processed cheese. I thought that must be a sign of desperation and deprivation, so I did not want to eat mine. I kept it for a needy Israeli . . . but I did not meet one. We did not know that June 10 would be the last day of the Six-Day War.

This was not my first visit to Israel. I had been on a summer camp trip in 1963 with Habonim, the Labor Zionist Youth Movement.

One of my strongest memories was the overwhelmingly warm and personal welcome I received from everyone I met, from the man in the makolet [corner grocery store], to the bus driver, to people in the street—not to mention many relatives, most of whom I had never previously met.

Perfect strangers would come up to me, give me a hug, and thank me for coming. It gave me a feeling that continued for a long time— [a feeling] that each and every one of us can make a meaningful contribution to building up this country. I felt that the little I do makes a difference, which is not something I ever felt in Europe. Another memory that I associate with my early days in Israel is the opening of the Kotel [Western Wall] to the general population for the first time on Shavuot [Pentecost], just days after the end of the war. Everyone was tremendously excited; this was the main subject of conversation in the days leading up to the opening. And then the day came; people poured into Jerusalem, and the crowds snaked over the hills on narrow paths that had been cleared for the purpose. And slowly—slowly—we moved toward the Old City, through narrow alleyways till…all of a sudden, there it was towering above us. I will never forget that breathtaking moment. It was very different from today, with the wide piazza [open square] before it.

I spent the first few weeks volunteering on Kibbutz Neot Mordechai in the Upper Galilee, picking apples. The fruit was just ripe and the usual pickers were all on the front line or elsewhere in the army. As much as we could pick got marketed; the rest went to waste. After that, I moved to Jerusalem where I would help in the volunteer office of the Jewish Agency. I was offered the position because I knew several languages—and because my cousin worked there and invited me to come to Jerusalem and live in her home in the Rassco neighborhood.

This was a wonderful start to my life in Israel. I grew to know and love the little town that was Jerusalem and made many friends with whom I am still close today. After three months, things started to calm down and normalize. It was time to organize my life, which would clearly continue to be lived in Israel. I joined the next ulpan [Hebrew-language intensive] that happened to be located in Beersheba. I recall coming up to Jerusalem the next year for a striking military parade on Independence Day. We lined the main streets of Jerusalem, and a seemingly endless stream of tanks, artillery, and soldiers passed by in strict formation to the accompaniment of brass bands. How proud we all were. I had never before come close to so much military equipment symbolizing such powerful victories in war. It took time for us to digest the wider meaning of all this and its implications for us and those we conquered. And then, some years later, the format for independence underwent drastic change, and there were no more big military parades.