Stories from the War—Uzi Eilam

[Israeli journalist Elliot Jager conducted this interview with retired Brig. Gen. Uzi Eilam. Eilam served in numerous Israel Defense Forces (IDF) field command roles and was in the vanguard of military research and development (R&D) as director general of Israel’s Atomic Energy Commission and as chief scientist and director of R&D in the Ministry of Defense.] 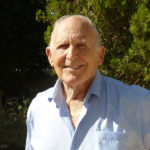 The day the war broke out, along with my fellow paratroopers, I was at the Tel NofAirbase located not far from Rehovot. At age 34, I was the commander of a battalion of paratroopers, though I was not a full-time army man.

I’d recently returned to Israel after studying business administration at Stanford University in California and had been offered, having only the rank of captain, the position of battalion commander. The IDF wanted me to take a senior officer’s course so that I could become a major, but I was busy with my R&D work as an engineer. I just didn’t have the time. So I turned to Maj. Gen. Ariel Sharon, whom I’d known since 1955, having been his intelligence officer in 1956 and 1957. I had been wounded and hospitalized in Operation Black Arrow [a 1955 counterterror operation in Gaza], and Sharon had recommended me for a citation of valor. So Sharon allowed me to take just part of the [officers] course: a week at the beginning, one week in the middle, and a week at the end.

Gen. Uzi Narkiss, commanding officer of the Central Command, then commissioned me a major—and everyone was happy.

Six or seven months after the Six-Day War, during which I served as commander of the 71st Battalion, 55th Paratroopers Brigade, I was promoted to the rank of lieutenant colonel. During the lead-up to the war, I constantly drilled my men. I ordered them to jump into trenches that they had dug and arranged for a tank to drive over the ditches. I wanted them to experience what combat conditions could be like. I also brought them to Ben Shemen Youth Village [an agricultural boarding school not far from the airport], which had several apartment-like buildings, because I wanted them to practice fighting in a built-up area.

We were assigned to jump into the northern Sinai Peninsula at night and capture the city of El Arīsh and support Gen. Israel Tal who was leading an IDF armored division against the Egyptians. Even before the jump, I had learned that our air force had succeeded in destroying—in three hours—most of Egypt’s war planes on the ground. It was a sensational success.

I’ve done 150 or so jumps, many while assigned to the special forces unit of the paratroopers. After your first jump, you feel exhilarated. After the second, elated; third, euphoric; and then you begin to be worried, especially after you’ve experienced, as I did, some complicated jumps. Night jumps are particularly scary. After Sinai fell into Israel’s hands so quickly, the paratroopers were reassigned to the Jerusalem theatre of operations. When we got to the Schneller military headquarters of the Jerusalem Brigade, I huddled with Maj. Gen. Mordechai Gur, who was commander of the 55th Paratroopers Brigade (Reserve). The Schneller compound was in a neighborhood so close to the border that it had been temporarily evacuated by the Jerusalem Brigade after being shelled by Jordanian military.

Although there had been enough time between leaving Tel Nof and arriving in Jerusalem for the intelligence branch of the Central Command to get us the information we needed, the data we needed was not available to us. There was no operational map of Jerusalem to be had. We lacked detailed information about the enemy and the terrain. All we had was a single blow-up photo to be shared by all three battalions of 55th Brigade.

So, honestly, we were not prepared. The men under my command felt fortunate because I happened to be familiar with Jerusalem. I’d been assigned to a special forces unit that carried out counter-terror operations in the 1950s around Jerusalem. And after I completed my first degree at the Technion, together with my wife Naomi—then a Hebrew University of Jerusalem medical student—we would stroll around Jerusalem on weekends. So, during the 1967 war, even under nighttime blackout conditions, I basically knew where we were in relation to our goals.

In the fighting for Jerusalem, my men in the 71st Battalion took Sheikh Jarrah [on the road to Mount Scopus] and Wadi al-Joz [north of the Old City at the head of the Kidron Valley]. From there we moved on to the Rockefeller Museum [just outside the Old City walls near Herod’s Gate]. That’s where we stopped at the end of the first day of fighting.

After a day and a half of fighting, our brigade had something like 96 dead and hundreds wounded. My battalion lost 12, which was comparatively better than other units in the area—and thanks in part to my personal familiarity with Jerusalem.

While the Old City was being liberated on June 7, 1967, I was the first to get to the Western Wall. I sent a soldier to guide Shlomo Goren, the IDF’s chief rabbi, to us near the Wall. He was about to blow the shofar [ram’s horn] at the Western Wall. But Goren was overcome with emotion. [He had just recited an ancient memorial prayer for the soldiers who had fallen in the liberation of Jerusalem, the Temple Mount, and the Western Wall.] He couldn’t get a note out. I told him that I knew how to blow the trumpet and offered to sound the shofar— so I did. Looking back, I think one of the lessons of the 1967 war was that, actually, like in any war, there were lots of mistakes—in its preparation and management. But because our victory was so overwhelming, we did not stop to draw the appropriate lessons.

Next came the 1969–1970 War of Attrition along the Suez Canal and the Jordan Valley. Ignoring our lack of preparedness in this conflict, too, cost us dearly when the 1973 Yom Kippur War caught us by surprise.

I learned from Ariel Sharon [Sharon became prime minister in 2001] that subordinate commanders need to be judged by how they conduct themselves under fire. This is the highest test. And when a war is over, the assessment work needs to begin.

Another lesson from 1967, in my opinion, is the importance of humility. Even if you win, you should be humble in order to create the right diplomatic atmosphere. Our victory was so unambiguous that we could not get to an agreement with the Arabs. Only after the Yom Kippur War did they—at least the Egyptians—feel to be on the winning side and were able to afford to go for an agreement. Post-1967, the Arabs abandoned their strong belief that we could be destroyed. The Arab states mostly paid lip-service to the Palestinian cause. They were unified by the Palestinian idea, but not more [than that]…. I am a believer in a two-state solution.

When I got back home after the 1967 fighting, I found a notice from the Savyon Construction Company. It said my house payment was overdue and I would have to pay a penalty. I wrote the manager a letter saying, “I don’t know what you were doing during the war,” [and then] I laid out for him what I was doing. He wrote back apologetically and said, “Don’t worry about the overdue bill” and “Forget about the late payment levy.”